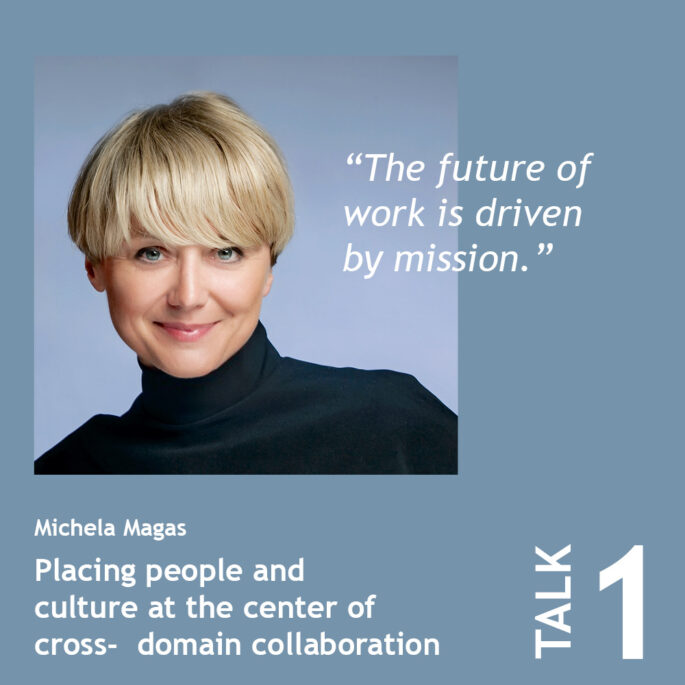 Placing people and culture at the center of cross-domain collaboration

Wir haben das 10-jährige Bestehen der Creative Region zum Anlass genommen, um die Potenziale und Stärken der oberösterreichischen Kreativwirtschaft in einer Publikation zusammenzutragen.
Can Art Thinking change the way the industrial sector approaches change? Jurij Krpan about the space between innovation and invention and the role of artists in it.
When was the last time you had an in-between moment where magic happened? Agnieszka Polkowska on the seemingly coincidental moments of creativity.
How can one actually foster creative collaboration in advanced manufacturing? Raffaela Seitz on the potential of creatives as catalysts for change.
The city of the future You might think Burning Man is just a bunch of nerds and weirdos celebrating in the desert. But for Arthur Mamou-Mani it’s a way of living: “It’s the city of the future”, he explained. In the past few years, the French architect has become a vital member of the Burning Man community. The one week long event takes place in the Black Rock Desert of Nevada every year and is not only known for partying but also futuristic sculptures. Arthur Mamou-Mani is one of their creators. Holistic architecture “We think of Burning Man as the city of the future, and we think of cities beyond just living”, Mamou-Mani says. But what does that have to do with architecture? “Our goal is to connect things and create more holistic architecture.” Experiences like Burning Man are the perfect playground for building communities of the future. Watch the full talk Arthur Mamou-Mani held a talk at the online conference „Creative collaborations for the future – drivers for interdisciplinary and cross-sectoral innovations in Europe“ that was hosted by Creative Region in March 2022. In his talk, Mamou-Mani gave an overview of Eco-Parametric Architecture, a discipline that studies the history of algorithmic and parametric design, how it enables the collaborative development of holistic systems and reproduces natural processes for environmental design. The London-based architect has focussed his work on circular design and fabrication and the future of living and working. Watch the …

Creative Collaboration for the Green Deal

Can creative collaboration contribute to accomplishing the Green Deal? Apparently, it is worth a try. As the European Commission announced their “New European Bauhaus” initiative in 2020, President Ursula von der Leyen voiced her mission:

“The New European Bauhaus is a project of hope to explore how we live better together after the pandemic. It is about matching sustainability with style, to bring the European Green Deal closer to people‘s minds and homes. We need all creative minds: designers, artists, scientists, architects and citizens to make the New European Bauhaus a success.“

When Ursula von der Leyen announced the New European Bauhaus initiative, it was just an idea. Michela Magas has played a key role in realising this idea over the past two years – and even before that. In 2012, Magas founded the MTF Labs, an organisation that connects experts in various fields through innovation labs. Through her work, Magas caught the attention of European politics and has been appointed as innovation advisor to the European Commission. And she is also part of the High Level Round Table for the New European Bauhaus. In this role, Magas helps grassroots communities to participate in the New European Bauhaus programme.

In her talk about Cross-Domain-Collaboration, Magas explains how this form of collaboration is at the heart of the New European Bauhaus. And it’s also about feeding policy from the ground up. The talk took place at the online conference „Creative collaborations for the future – drivers for interdisciplinary and cross-sectoral innovations in Europe“ that Creative Region hosted in March 2022.

Michela Magas sees her role in the High Level Round Table to foster the ideation process from the bottom-up to eventually impacting society. Her approach differs from those of most industrial collaboration projects: “We place people and culture at the centre of Cross-Domain-Collaboration.“

In her work as facilitator of innovation, Magas recognised that there is a disconnect between engineers, scientists and culture. So, she started connecting scientists with artists. To give an example on how tech and art can converge, Magas mentions DJ Arthro. The Swedish artist is disabled and was in search of a music setup that would allow him to perform. So, he joined forces with MTF Labs and created his own setup called Spaceship. “It dawned on me that the tools we invent determine whether a person is able or disabled”, Magas says. The collaboration with engineers helped DJ Arthro create a business out of his musical career.

Magas says she wants to challenge what we can do with technologies and has put an emphasis on Artificial Intelligence over the years, putting experts and artists at the forefront of the projects. And to tie it back to the New European Bauhaus initiative and its aim to achieve the green deal, she refers to the MTF Labs’ project “Just Ocean” which took place in Aveiro, Portugal, in 2021: 50 experts of 26 countries were assembled in person and eight global satellites joined online for a week of creative brainstorming, co-creation and response to grand challenges. The collaboration lab spawned 13 new projects and a six-part symphony about the environment. A filmmaker also produced a documentary about the event. “The process involved immersing yourself with nature, this is about addressing challenges hands-on.”

The principles of the New European Bauhaus are based on sustainability, Magas explains: “When we first started to map out our values, we discovered a strong line of justice and this is where we built our starting point.” Based on their values, the High Level Round Table created a concept paper that outlines the New European Bauhaus mission and approach to connecting industries and changing the environment. According to the paper, “a culture- and design-led approach is an important strategy for the transition to a low carbon, regenerative and just society.“ In terms of outcome, the New European Bauhaus team strongly believes in learning by doing. Magas sees collaborative and experimental labs as a useful tool because they allow and encourage participants to explore holistic sustainable systems spanning multiple dimensions: environmental, social, cultural, economic and political.

Compared to the traditional Industry 4.0 mindset, New European Bauhaus takes a “more than human”, inclusive of all ecosystems perspective, which according to Magas is a result of the first projects within the programme. It’s an indicator that the grassroots feeding policy concept might be working. “Placing culture and creativity at the centre of decision-making has sped up how we understand what paradigms we need to tackle”, Magas reports. “According to the New European Bauhaus we believe in radical inclusion that doesn’t put people in categories”, rather industries should focus on where people converge and how technologies can be used for the greater good: “The future of work is driven by mission.”

“We want to inject a spark in regions across Europe and for everyone to be involved in this prototyping on the ground.”

New European Bauhaus is all about the people and collaboration on the ground: “If every person involved can take one step forward, we’ll see a big transformation in society“, says Magas.

As the New European Bauhaus is intended as a movement, Magas encourages everyone to participate: “Grassroots organisations can take action and don’t need to wait for support from the government.“ The way is to go from the ground up and then present best practices of the initiative to the local governments, which have had great responses so far, according to Magas. Once the grassroots projects reach the attention of politics, they can inform and feed policy. And since the labs conduct high-quality research and prototyping, these policies are then evidence-based.

While the first round of the New European Bauhaus programme was focussed on non-profit-organisations, Magas says there will be the opportunity for other organisations to participate in the future. To award collabo- rative projects of all EU countries, the New European Bauhaus Prize was initiated. One of Magas’ concerns is that some regions will be left out and not be motivated enough to participate, so the High Level Round Table is working hard to include all regions.

In terms of more current events, participants of the New European Bauhaus initiative are looking into ways of helping Ukraine during the war. A way of support might be architects designing shelters for refugees.

Creative Collaborations for the Future

This article is part of the publication Creative collaborations for the future.