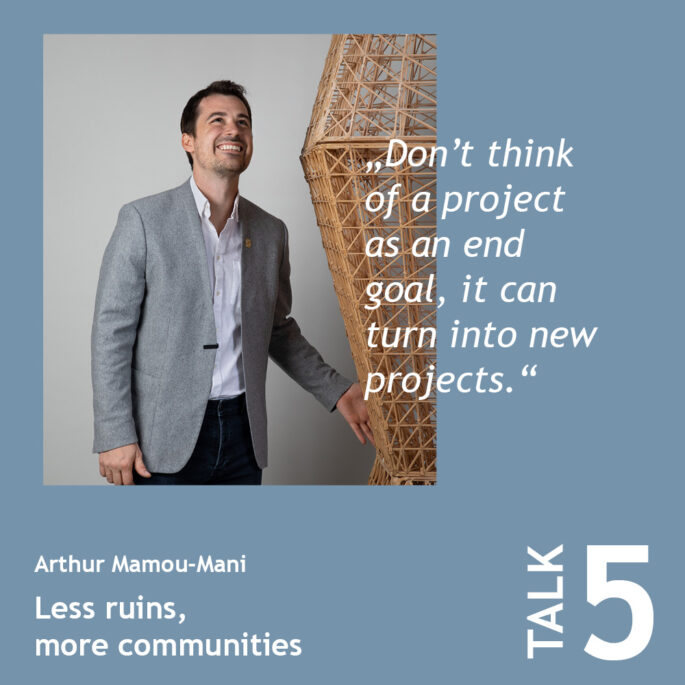 Welche Veränderungen kommen durch den 3D-Druck auf die Bauindustrie und die Architektur zu? Was ist mit 3D-Druck in der Architektur bereits möglich? Und mit welchen Herausforderungen ist die Branche konfrontiert?
Mit bei der Design Week Milano: Studio HUBFOUR mit Fibonacci Lighting. Die Lampe basiert auf der Fibonacci Zahlenreihe, die Grundlage für viele Muster in der Natur ist.
Can creative collaboration contribute to accomplishing the Green Deal? In her talk about Cross-Domain-Collaboration, Michela Magas explains how this form of collaboration is at the heart of the New European Bauhaus.
Can Art Thinking change the way the industrial sector approaches change? Jurij Krpan about the space between innovation and invention and the role of artists in it.
When was the last time you had an in-between moment where magic happened? Agnieszka Polkowska on the seemingly coincidental moments of creativity.
How can one actually foster creative collaboration in advanced manufacturing? Raffaela Seitz on the potential of creatives as catalysts for change.
The online conference will introduce "The New European Bauhaus" and showcase creative approaches and cross-sectoral innovations in Europe.

The city of the future

You might think Burning Man is just a bunch of nerds and weirdos celebrating in the desert. But for Arthur Mamou-Mani it’s a way of living: “It’s the city of the future”, he explained. In the past few years, the French architect has become a vital member of the Burning Man community. The one week long event takes place in the Black Rock Desert of Nevada every year and is not only known for partying but also futuristic sculptures. Arthur Mamou-Mani is one of their creators.

Arthur Mamou-Mani held a talk at the online conference „Creative collaborations for the future – drivers for interdisciplinary and cross-sectoral innovations in Europe“ that was hosted by Creative Region in March 2022. In his talk, Mamou-Mani gave an overview of Eco-Parametric Architecture, a discipline that studies the history of algorithmic and parametric design, how it enables the collaborative development of holistic systems and reproduces natural processes for environmental design. The London-based architect has focussed his work on circular design and fabrication and the future of living and working. Watch the full talk here:

Reducing the fear of experimenting

To circle back on Burning Man, Mamou-Mani quotes its founder Larry Harvey:

“Communities are not produced by sentiment or mere goodwill. They grow out of a shared struggle. Our situation in the desert is an incubator for the community.”

That shared struggle will create pockets of initiatives that eventually will change the world, Mamou-Mani explains. And these assumptions bring us to creative collaboration.

For Mamou-Mani, creating buildings is not a purely technical approach, he incorporates many aspects into the design and manufacturing of buildings. So, what is the starting point of a temple in the desert? In his studio, in London, Mamou-Mani set up a “mini-factory”. His team creates early models of a structure through the use of 3D printers. And even in the early stages, the architects try to reduce waste by using and reusing lightweight materials that are created from sources like fermented sugars.

“There’s always this fear that you create a lot of waste if you experiment. But we think about the carbon footprint and that’s how we reduce the fear of creating.“

Another aspect of environmental design is the notion that buildings don’t have to exist forever. “In the future, buildings will build themselves but also unbuild themselves”, Mamou-Mani predicts and makes a comparison to dying plants that nature eventually will replace by growing new plants. So when Arthur Mamou-Mani and his team develop eco-parametic structures, they think as far ahead as the end of a project. For instance, the timber used in one construction could be reused after dismantling another construction. Mamou-Mani used a reclaimed timber from an old bridge to build a tower. So in the future, as Arthur Mamou-Mani sees it, we’ll see fewer ruins. And this relates back to Burning Man, where you are not allowed to leave a trace behind.

This approach also influences the design process: “We create a system rather than a form, we start thinking in a bottom-up way”, Manou-Mani explains. “Don’t think of a project as an end goal, it can turn into new projects.” We should rather accept things as systems that are beyond us.

The transformation process is tricky though, as Manou-Mani recently experienced building his own home: “We used materials that are not petroleum-based and these are very difficult to find right now.” He used fermented sugars, recycled glass and clay among other materials. Another example of eco-parametric structures in the home space is a chandelier that was 3D-printed with fireproof materials. Trying to build eco-friendly homes also means finding ways to reduce air conditioning, which is known for its high energy consumption.

Not only is it challenging to do eco-conscious construction in the residential space, but it can also be challenging to scale. Manou-Mani says his studio proves to develop large-scale projects by working with corporate clients and big brands in the fashion space. When taking on a new development, Manou-Mani and his team take in the space and try to find local materials to incorporate: “We’ve been thinking about how to create art that builds society around it.”

Logistics are key in green development

Developing projects that are simple to build and assemble, can be a complex undertaking. Manou-Mani says he learned a lot about transportation through his work: “The truck itself is the most important designer in the process. Logistics is something we really just ignore, but it’s key to whether a building is green or not.”

Besides truck drivers, machines are an important part of the conversation in the design process. The information sent to the 3D printers is vital: “You can be a lot more accurate if you communicate directly with the craftsman, in this case, the robot.” Manou-Mani also advises not to be afraid of machines:

“Without the machines, the design cannot be a way of thinking. The robot needs you, the algorithm needs you, they don’t just come up with stuff. Machines are a little bit dumb and they won’t stop if you don‘t tell them to. They are a tool, an extension of your creativity and they need dialogue.”

Arthur Manou-Mani has been building structures for Burning Man since 2013. In 2018, he made his biggest construction yet, a temple called Galaxia. It was Manou-Mani’s interpretation of the black hole idea that decompresses itself and takes anything with it. To assemble Galaxia, 120 volunteers worked for 18 days and at the end of the event, it was set on fire: “It was a ritual of letting go.”

The experience of Arthur Manou-Mani showed that eco-parametic architecture and collaborative design are not only innovative and community-building, but also expensive. He admits that a lot of funding is needed at this stage to develop projects like these and tells fellow architects to act as entrepreneurs – which is something designers don’t usually do: “They don’t really do scalable companies because the business itself relies so much on them.” So when Manou-Mani and his team started fundraising, they showed that it can actually be a business case and the technique-driven design doesn’t need to rely on one person. In terms of creating buildings and communities, Manou-Mani likes to think beyond functionality: “Maybe there’s a higher level that connects us.“

Advices for collaborative and eco-parametic architecture:

Arthur Mamou-Mani is a French architect and director of the award-winning practice Mamou-Mani Architects, which specialises in a new kind of digitally designed and fabricated architecture. He is a lecturer at the University of Westminster and owns a digital fabrica- tion laboratory called the FabPub which allows people to experiment with large 3D Printers and Laser Cutters. Since 2016, he is a fellow of The Royal Society for the Encouragement of Arts, Manufactures and Commerce. He has won the Gold Prize at the American Architec- ture Prize for the Wooden Wave project installed at Buro Happold Engineering. Arthur gave numerous talks including the TedX conference in the USA and has been featured in The New-York Times and Forbes. Mamou-Mani’s clients include ARUP, Buro Happold Engineering, Karen Millen Fashion, The Burning Man Festival, Food Ink and Imagination ltd. Prior to founding Mamou-Mani in 2011, he worked with Atelier Jean Nouvel, Zaha Hadid Architects and Proctor and Matthews Architects.

Creative Collaborations for the Future

This article is part of the publication Creative collaborations for the future.