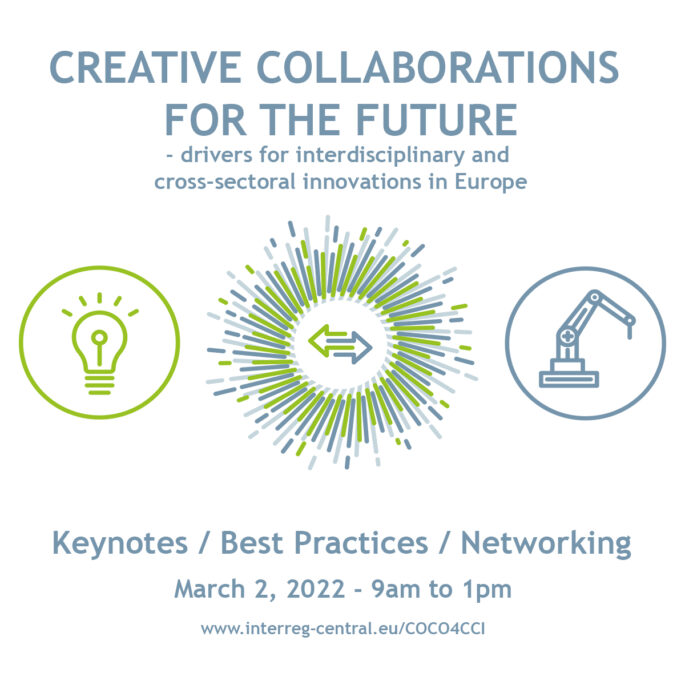 Conference: Creative collaborations for the future

Flächenversiegelung, Fachkräftemangel und die nachhaltige Rohstoffnutzung: Das wird die Bauwirtschaft auch in Zukunft beschäftigen; Herausforderungen, die auch die (Neu-)Gestaltung von handwerklichen Prozessen bedarf. Das betrifft auch Dachkonstruktionen und Dacheindeckungen.
Du bist Designer*innen, Architekt*innen bzw. in der Kreativwirtschaft tätig und hast Interesse an neuen, spannenden Projekten und Aufträgen und der Zusammenarbeit mit Unternehmen aus unterschiedlichen Branchen? Come in!
Für den ersten Eindruck gibt es keine zweite Chance. Dass die Fassade eines Gebäudes aber weit mehr ist als nur hübsche Hülle, beweist zeitgemäße Architektur durch den Einsatz von Holz im Fassadenbau.
Gemeinsam mit den Kolleg*innen vom Möbel- und Holzbau-Cluster der Business Upper Austria fördern wir unter dem Motto “Creativity drives Innovation” mit gezielten Angeboten langfristige Kooperationen zwischen produzierenden Industrien und der Kreativwirtschaft.
Gemeinsam mit einem internationalen Projektteam haben wir uns zum Ziel gesetzt, die Vernetzung zwischen der Kultur- und Kreativwirtschaft und Unternehmen mit Fokus auf „advanced manufacturing“ zu fördern und voranzutreiben und Kooperationen entlang neuer Wertschöpfungsketten zu ermöglichen.
When was the last time you had an in-between moment where magic happened? Agnieszka Polkowska on the seemingly coincidental moments of creativity.
How can one actually foster creative collaboration in advanced manufacturing? Raffaela Seitz on the potential of creatives as catalysts for change.
The city of the future You might think Burning Man is just a bunch of nerds and weirdos celebrating in the desert. But for Arthur Mamou-Mani it’s a way of living: “It’s the city of the future”, he explained. In the past few years, the French architect has become a vital member of the Burning Man community. The one week long event takes place in the Black Rock Desert of Nevada every year and is not only known for partying but also futuristic sculptures. Arthur Mamou-Mani is one of their creators. Holistic architecture “We think of Burning Man as the city of the future, and we think of cities beyond just living”, Mamou-Mani says. But what does that have to do with architecture? “Our goal is to connect things and create more holistic architecture.” Experiences like Burning Man are the perfect playground for building communities of the future. Watch the full talk Arthur Mamou-Mani held a talk at the online conference „Creative collaborations for the future – drivers for interdisciplinary and cross-sectoral innovations in Europe“ that was hosted by Creative Region in March 2022. In his talk, Mamou-Mani gave an overview of Eco-Parametric Architecture, a discipline that studies the history of algorithmic and parametric design, how it enables the collaborative development of holistic systems and reproduces natural processes for environmental design. The London-based architect has focussed his work on circular design and fabrication and the future of living and working. Watch the …

Drivers for interdisciplinary and cross-sectoral innovations in Europe

The New European Bauhaus brings together citizens, experts, businesses and institutions and facilitates discussions about creating a better tomorrow. Also it mobilizes different groups like designers, architects, engineers, scientists, students and creative minds across disciplines to reimagine sustainable living in Europe and beyond.

Especially when it comes to creating impact for the future, the skills and approaches of the cultural and creative industries in Central Europe are highly valuable. They have a great potential to link up with other industry sectors and boost economic and social development by empowering innovation processes with creative inputs.

Grit Ackermann, Head of Project Department, Chamber of Commerce and Industry of Slovenia

Michela Magas, designer and innovation advisor to the European Commission and the G7 leaders, Member of President von der Leyen’s High Level Round Table for the New European Bauhaus.

Michela Magas will speak about 10 years of feeding policy from grassroots creative experimentation with multidisciplinary communities that unite the CCI with scientific researchers and industrial partners. This hands-on approach to innovation prototyping and evidence-based policy making has proven to boost regional ecosystems – each according to their needs and according to the challenges they face. Even during the pandemic co-creation in blended environments has resulted in multipliers and personal transformations with multiple awards, ongoing funding, and long-term collaborations. Michela will show how these methodologies have become relevant for policy at high level in initiatives such as the New European Bauhaus.

Jurij Krpan, Artistic Director of Kersnikova Institute Ljubljana. He is leading the establishment of Lab for speculative innovation and expert in involving art-thinking and design-thinking into the innovation process facilitated by innovation catalysts.

In his talk „Mastery of Weaving Ideas“ he contributes to the questions „How might we engage/mobilize people in projects (in times of uncertainty)?“ and „How do you use the know-how and experience of a diverse group of people to co-create?“

„The process of innovation is a journey to unpredictable, and unknown. If we are brave enough to step on new untrodden paths that will possibly take us to open new doors to exciting discoveries, we have to give up to our situated knowledge and proven habits. That state of mind might be challenging for experienced professionals who were asked to give their expertise, and contribute to the process of innovation.

Ultimately, that is what their reputation is made of. So, to avoid the perpetuation of the same, proving ideas with already accepted and confirmed practices that is channeling us into manageable realms, we have to create an atmosphere of understanding, acceptance of otherness, and embracing of uncertainty. To create that stimulating and inspiring environment where innovators can thrive in their speculations and weaving ideas into something new, we have foreseen an agency of innovation catalyst who’s role is to instigate the state of mind in the innovation room and enable connecting ideas seemingly uncontactable.“

Agnieszka Polkowska, speculative designer, design curator and educator in design, founder of Trendspot and co-founder of Touching Points studio, which was established to transfer ideas between different sectors and implementing them into strategic actions.

In her talk she contributes to the question „How might we design inclusive and open rooms/spaces?“

„Space is energy first, which later – with added structures becomes – physical. In order to create a situation, which is a collaborative one, I believe we need to build a system where each realm can and have a potential to become a valuable input to each other. My aim is to design a space, which will be inclusive and to build creative cycles, in which either one domain or single individual initiate a revolution or evolution by affecting one another. I will share my experience with situations, contexts and used tools that truly helped me with welcoming creative minds to innovate with cross-pollinating ideas.“

11:00 am: Networking with the speakers & participants / break

Raffaela Seitz dedicates herself to the conception and organisation of cross sector offers in the Cross Innovation Hub at Hamburg Kreativ.

In her talk she contributes to the question „How might we turn experiments to sustainable concepts/models?“

Arthur Mamou-Mani is a French architect and director of the award-winning practice Mamou-Mani Architects, which specialises in a new kind of digitally designed and fabricated architecture. He is a lecturer at the University of Westminster and owns a digital fabrication laboratory called the FabPub, which allows people to experiment with large 3D Printers and Laser Cutters.

In his talk he contributes to the question „How might we improve the quality of our living experience?“

12:10 am: Networking with the speakers & participants / break

Agnieszka Polkowska is a speculative designer, design curator and educator with a Ph.D. in design. She is a founder of a TRENDSPOT future research & speculative design studio as well as co-founder of Touching Points studio which was established to transfer ideas between different sectors and implementing them into strategic actions. She actively works in design and futures education as Assistant professor at Stettin Art Academy running speculative & subversive design studios as well as carries out interdisciplinary courses in trends and foresight at Total Design Management postgraduate studies at Warsaw University of Technology. Agnieszka is an expert and consultant of Dutch think-tank MARE Amsterdam and cooperates with such institutions as the Institute of Industrial Design, Pomeranian Science and Technology Park Gdynia, Łódź Design Festival. She had the pleasure to contribute and worked on research and implementation projects for such clients as Samsung, MTV, Play, Vogue Poland, Ceramika Paradyż, Abriga, Biżuteria YES, eobuwie.pl, Decathlon as well as many others. She is also a member of the expert board of the must have competition at the Łódź Design Festival.

Jurij Krpan is Artistic Director of Kersnikova Institute Ljubljana, focusing on contemporary investigative arts that are thematizing the impact of new technologies on individuals and society as a whole. Being an advocate of the culturalisation of technology that is emancipating and empowering people to use contemporary technology with sovereignty, he is leading the establishment of Lab for speculative innovation, where arts can help to achieve speculative/foreseeing/radical social and product innovation by involving art-thinking and design-thinking into the innovation process facilitated by innovation catalysts.

Raffaela Seitz dedicates herself to the conception and organisation of cross-sector offers in the Cross Innovation Hub. As a studied cultural scientist (Leuphana University of Lüneburg) and art historian (University College London) with economic study background (University of Mannheim, Leuphana University of Lüneburg, London School of Economics and Political Science), she moves and acts along the intersection of art, culture, science and business. Before Raffaela Seitz joined the team of Hamburg Kreativ Gesellschaft, she worked in strategic innovation consulting and trend research.She deeply believes that it takes swarm creativity and intelligence to successfully face business and societal challenges.

Arthur Mamou-Mani is a French architect and director of the award-winning practice Mamou-Mani Architects, which specialises in a new kind of digitally designed and fabricated architecture. He is a lecturer at the University of Westminster and owns a digital fabrication laboratory called the FabPub which allows people to experiment with large 3D Printers and Laser Cutters. Since 2016, he is a fellow of The Royal Society for the Encouragement of Arts, Manufactures and Commerce. He has won the Gold Prize at the American Architecture Prize for the Wooden Wave project installed at BuroHappold Engineering. Arthur gave numerous talks including the TedX conference in the USA and has been featured in The New-York Times and Forbes. Mamou-Mani’s clients include ARUP, Buro Happold Engineering, Karen Millen Fashion, The Burning Man Festival, Food Ink and Imagination ltd. Prior to founding Mamou-Mani in 2011, he worked with Atelier Jean Nouvel, Zaha Hadid Architects and Proctor and Matthews Architects.

The online conference is part of project COCO4CCI, short for „Collaboration Collider for Cultural and Creative Industries“, aiming to link up creatives with other industry sectors to foster innovation processes through?out Central Europe. COCO4CCI is funded with support from the European Commission.